Tibet; this is an online space dedicated to all who love Tibet.

This site is a celebration of Tibetan Cultural Resistance. Tibetans in Tibet and in exile are reasserting their cultural identity and amplifying the voices of courageous singers, writers and bloggers who – in spite of an escalating crackdown since the Tibetan Uprisings of 2008 – are devoting their work to the enduring spirit of Tibetan resistance. 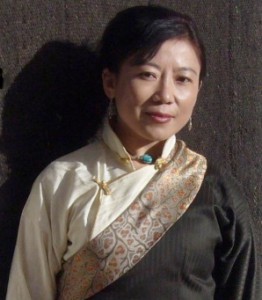 Tsering Woeser is a well-known Tibetan writer, poet and blogger. She was born to a Tibetan mother and a Han father.

As the Tibetan poet and blogger Woeser wrote in August 2009: “….there has been a constant stream of books, magazines, articles and songs in the mother tongue. Tibetan writers have broken through the silence, [beyond] the terror, and even more of them are inspiring even more Tibetans”.

Much of the cultural resurgence focuses on the Tibetan identity and what it means to be Tibetan. With a strong assertion of the Tibetan-ness of the people, Tibetan culture has become a means whereby the Tibetan nation is being recreated and Tibetans are re-finding their voice.

The powerful song “Mentally Return,” is an example of this resurgence. Sung by four of the best Tibetan singers, the song praises the natural beauty and bounty of the land of Tibet and eulogizes the Tibetan people for their kindness and courage. Here’s a part of the lyric:

“The six migratory beings are our kind parents,
Non-violence and peace are our mental wealth,
Bravery, wisdom and heroism are the strength of our heart:
The nationality who inhabit this land of Snows,
The first people to settle here and exercise ownership,
Are us, the ruddy faced Tibetans of the Land of Snows.”

Another prominent Tibetan, writer Tragyal (pen name Shogdung), who was detained and held for six months in 2010. He is the author of “The Line between Sky and Earth” (gnam sa go ‘byed), published illegally in March 2009. The work has been described by the journalist Andrew Jacobs as “a poetic and painstakingly crafted indictment of Chinese rule”, which includes a call for Tibetan bureaucrats and intelligentsia to stop cooperating with Beijing and wage a campaign of civil disobedience.

Tragyal (Pen name: Shogdung) is a Tibetan writer who wrote "The Line Between Sky and Earth" about the 2008 Tibetan unrest. He advocates peaceful revolution using civil disobedience. He was arrested by Chinese authorities in April 2010 on a charge of "splittism".

In the conclusion of his book Tragyal writes: “I am naturally terrified at the thought that once this essay has been made public, I will eventually have to endure the hot hells and cold hells on earth…I may ‘lose my head because of my mouth,’ but this is the path I have chosen, so the responsibility is mine.” [Translation by International Campaign for Tibet. The book has not yet been translated into English in its entirety but is available online in Tibetan.]