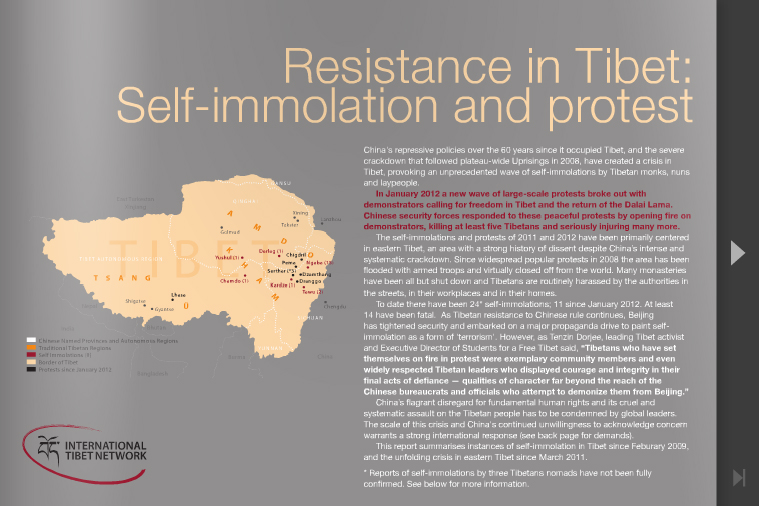 China’s repressive policies over the 60 years since it occupied Tibet, and the severe crackdown that followed plateau-wide Uprisings in 2008, have created a crisis in Tibet, provoking an unprecedented wave of self-immolations by Tibetan monks, nuns and laypeople.

In January 2012 a new wave of large-scale protests broke out with demonstrators calling for freedom in Tibet and the return of the Dalai Lama. Chinese security forces responded to these peaceful protests by opening fire on demonstrators, killing at least five Tibetans and seriously injuring many more.

The self-immolations and protests of 2011 and 2012 have been primarily centered in eastern Tibet, an area with a strong history of dissent despite China’s intense and systematic crackdown. Since widespread popular protests in 2008 the area has been flooded with armed troops and virtually closed off from the world. Many monasteries have been all but shut down and Tibetans are routinely harassed by the authorities in the streets, in their workplaces and in their homes.

To date there have been 24* self-immolations; 11 since January 2012. At least 14 have been fatal. As Tibetan resistance to Chinese rule continues, Beijing has tightened security and embarked on a major propaganda drive to paint self-immolation as a form of ‘terrorism’. However, as Tenzin Dorjee, leading Tibet activist and Executive Director of Students for a Free Tibet said, “Tibetans who have set themselves on fire in protest were exemplary community members and even widely respected Tibetan leaders who displayed courage and integrity in their final acts of defiance — qualities of character far beyond the reach of the Chinese bureaucrats and officials who attempt to demonize them from Beijing.”

China’s flagrant disregard for fundamental human rights and its cruel and systematic assault on the Tibetan people has to be condemned by global leaders. The scale of this crisis and China’s continued unwillingness to acknowledge concern warrants a strong international response.

This report highlights the widespread recent resistance in Tibet and demonstrates the strong Tibetan identity and unity among the Tibetan people.