(March 18, 2013) On February 27, Lhamo Tso was granted political asylum by the United States of American in San Francisco. The idea to seek asylum in US came up last July when the Bay Area Friends of Tibet (BAFoT) along with other groups invited Lhamo Tso to the United States and organized the West Coast leg of the US lecture tour. The purpose of her visit was to advocate for the release of her husband, Dhondup Wangchen, who is serving a six year prison sentence in China. 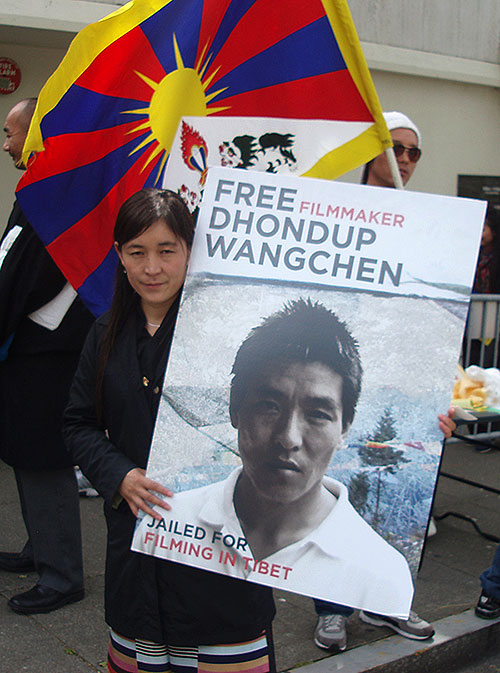 After returning back to India Lhamo Tso travelled again to California and with the help of BAFoT obtained political asylum. Her main concern now is to reunite her family and to continue with her efforts for the release of her husband.
BAFoT is pleased that the United States granted her political asylum request: “She would definitely have been put in prison and mistreated if she were sent back to China-occupied-Tibet,” said BAFoT president Giovanni Vassallo. “We are very grateful to the U.S. government and extend congratulations to her and her family and pray for the day to come quickly that she will be reunited with her husband, a genuine and brave Tibetan hero who dared to nonviolently express care and love for his homeland and its special people.” He added, “We look to China to show grace and compassion now by releasing Dhondup Wangchen immediately to get the medical attention that is his human right.”
Lhamo Tso is very pleased and gives thanks on behalf of her family the US government for showing so much concern for her request. She would like to express her gratitude for all the help her family was given by various individuals and groups such as Mr. Tenpa Tsering in Delhi, Testen and Nyima Thondup in Switzerland, her friends in Dharamsala, the Tibetan Women’s Association in India, the officials of the Tibetan Children’s Village, the Dhomed Association, Gu- Chu-Sum, Tibetan Youth in Europe, US and India, International Tibet Network, Students for a Free Tibet, Save Tibet Austria, International Campaign for Tibet, Amnesty International, Committee to Protect Journalist, the various Tibetan Communities, her pro bono attorney, Kathleen McKinley, Tenzin N. Tethong and Yangchen Surkhang Lakar, Tibet support groups around the world, and anyone who helped her along the way. Her special thanks go to Filming for Tibet, toBAFoT, and the Vassallo family who have given her moral support and generous hospitality for many months.
Jamyang Tsultrim, president of Filming for Tibet who helped producing “Leaving Fear Behind” says: “After a long journey, Lhamo Tso has finally reached a safe haven. We hope that Dhondup Wangchen will soon join his wife and four children who have suffered from family separation. We also hope that Lhamo Tso can now start a more peaceful chapter in her family’s story and would like to ask all people to support her in finding a suitable job and make a successful start in the US.”
As Lhamo Tso continues to campaign for Dhondup’s release and resettle herself and four children to the United States, BAFoT will coordinate all courtesies that may be extended to Lhamo to offset the costs of her family’s US resettlement.
Please support Dhondup Wangchen and Lhamo Tso and visit http://friends-of-tibet.org/projects/lhamo-tso-freedom-fund